The following are some comments of scientists1 on the scientific miracles in the Holy Quran. All of these comments have been taken from the videotape entitled This is the Truth. In this videotape, you can see and hear the scientists while they are giving the following comments. (To view the RealPlayer video of a comment, click on the link at the end of that comment. For a copy of this videotape, please visit this page.)

1) Dr. T. V. N. Persaud is Professor of Anatomy, Professor of Pediatrics and Child Health, and Professor of Obstetrics, Gynecology, and Reproductive Sciences at the University of Manitoba, Winnipeg, Manitoba, Canada. There, he was the Chairman of the Department of Anatomy for 16 years. He is well-known in his field. He is the author or editor of 22 textbooks and has published over 181 scientific papers. In 1991, he received the most distinguished award presented in the field of anatomy in Canada, the J.C.B. Grant Award from the Canadian Association of Anatomists. When he was asked about the scientific miracles in the Quran which he has researched, he stated the following:

“The way it was explained to me is that Muhammad was a very ordinary man. He could not read, didn’t know [how] to write. In fact, he was an illiterate. And we’re talking about twelve [actually about fourteen] hundred years ago. You have someone illiterate making profound pronouncements and statements and that are amazingly accurate about scientific nature. And I personally can’t see how this could be a mere chance. There are too many accuracies and, like Dr. Moore, I have no difficulty in my mind that this is a divine inspiration or revelation which led him to these statements.” (View the RealPlayer video of this comment Video Clip)

In every one of you, all components of your creation are collected together in your mother’s womb by forty days...2

If forty-two nights have passed over the embryo, God sends an angel to it, who shapes it and creates its hearing, vision, skin, flesh, and bones....3

“So that the two hadeeths (the sayings of the Prophet Muhammad ) that have been noted provide us with a specific time table for the main embryological development before forty days. Again, the point has been made, I think, repeatedly by other speakers this morning: these hadeeths could not have been obtained on the basis of the scientific knowledge that was available [at] the time of their writing . . . . It follows, I think, that not only there is no conflict between genetics and religion but, in fact, religion can guide science by adding revelation to some of the traditional scientific approaches, that there exist statements in the Quran shown centuries later to be valid, which support knowledge in the Quran having been derived from God.” (View the RealPlayer video of this comment Video Clip)

3) Dr. E. Marshall Johnson is Professor Emeritus of Anatomy and Developmental Biology at Thomas Jefferson University, Philadelphia, Pennsylvania, USA. There, for 22 years he was Professor of Anatomy, the Chairman of the Department of Anatomy, and the Director of the Daniel Baugh Institute. He was also the President of the Teratology Society. He has authored more than 200 publications. In 1981, during the Seventh Medical Conference in Dammam, Saudi Arabia, Professor Johnson said in the presentation of his research paper:

“Summary: The Quran describes not only the development of external form, but emphasizes also the internal stages, the stages inside the embryo, of its creation and development, emphasizing major events recognized by contemporary science.” (View the RealPlayer video of this comment Video Clip)

“As a scientist, I can only deal with things which I can specifically see. I can understand embryology and developmental biology. I can understand the words that are translated to me from the Quran. As I gave the example before, if I were to transpose myself into that era, knowing what I knew today and describing things, I could not describe the things which were described. I see no evidence for the fact to refute the concept that this individual, Muhammad, had to be developing this information from some place. So I see nothing here in conflict with the concept that divine intervention was involved in what he was able to write.”4 (View the RealPlayer video of this comment Video Clip)

4) Dr. William W. Hay is a well-known marine scientist. He is Professor of Geological Sciences at the University of Colorado, Boulder, Colorado, USA. He was formerly the Dean of the Rosenstiel School of Marine and Atmospheric Science at the University of Miami, Miami, Florida, USA. After a discussion with Professor Hay about the Quran’s mention of recently discovered facts on seas, he said:

“I find it very interesting that this sort of information is in the ancient scriptures of the Holy Quran, and I have no way of knowing where they would come from, but I think it is extremely interesting that they are there and that this work is going on to discover it, the meaning of some of the passages.” And when he was asked about the source of the Quran, he replied: “Well, I would think it must be the divine being.”

5) Dr. Gerald C. Goeringer is Course Director and Associate Professor of Medical Embryology at the Department of Cell Biology, School of Medicine, Georgetown University, Washington, DC, USA. During the Eighth Saudi Medical Conference in Riyadh, Saudi Arabia, Professor Goeringer stated the following in the presentation of his research paper:

In a relatively few aayahs (Quranic verses) is contained a rather comprehensive description of human development from the time of commingling of the gametes through organogenesis. No such distinct and complete record of human development, such as classification, terminology, and description, existed previously. In most, if not all, instances, this description antedates by many centuries the recording of the various stages of human embryonic and fetal development recorded in the traditional scientific literature

6) Dr. Yoshihide Kozai is Professor Emeritus at Tokyo University, Hongo, Tokyo, Japan, and was the Director of the National Astronomical Observatory, Mitaka, Tokyo, Japan. He said:

I am very much impressed by finding true astronomical facts in [the] Quran, and for us the modern astronomers have been studying very small pieces of the universe. We’ve concentrated our efforts for understanding of [a] very small part. Because by using telescopes, we can see only very few parts [of] the sky without thinking [about the] whole universe. So, by reading [the] Quran and by answering to the questions, I think I can find my future way for investigation of the universe

7) Professor Tejatat Tejasen is the Chairman of the Department of Anatomy at Chiang Mai University, Chiang Mai, Thailand. Previously, he was the Dean of the Faculty of Medicine at the same university. During the Eighth Saudi Medical Conference in Riyadh, Saudi Arabia, Professor Tejasen stood up and said:

“During the last three years, I became interested in the Quran . . . . From my study and what I have learned from this conference, I believe that everything that has been recorded in the Quran fourteen hundred years ago must be the truth, that can be proved by the scientific means. Since the Prophet Muhammad could neither read nor write, Muhammad must be a messenger who relayed this truth, which was revealed to him as an enlightenment by the one who is eligible [as the] creator. This creator must be God. Therefore, I think this is the time to say La ilaha illa Allah, there is no god to worship except Allah (God), Muhammadur rasoolu Allah, Muhammad is Messenger (Prophet) of Allah (God). Lastly, I must congratulate for the excellent and highly successful arrangement for this conference . . . . I have gained not only from the scientific point of view and religious point of view but also the great chance of meeting many well-known scientists and making many new friends among the participants. The most precious thing of all that I have gained by coming to this place is La ilaha illa Allah, Muhammadur rasoolu Allah, and to have become a Muslim.

After all these examples we have seen about the scientific miracles in the Holy Quran and all these scientists’ comments on this, let us ask ourselves these questions:

Could it be a coincidence that all this recently discovered scientific information from different fields was mentioned in the Quran, which was revealed fourteen centuries ago?

Could this Quran have been authored by Muhammad or by any other human being?

The only possible answer is that this Quran must be the literal word of God, revealed by Him. 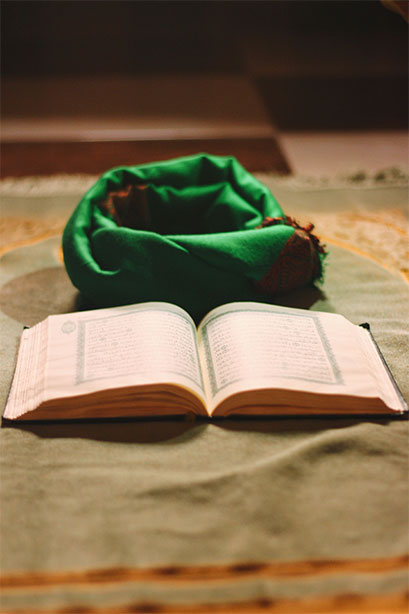